Lieh-Tzu: The Treatise of the Trancendent Master of the Void 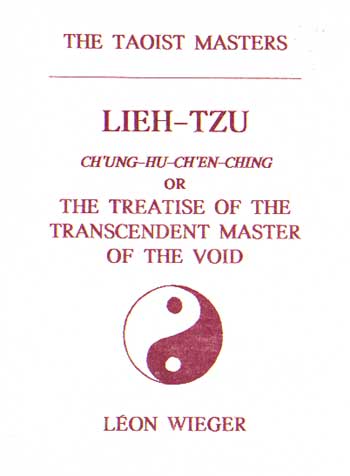 Lieh-tzu, Master Lieh, lived some forty years in obscurity and poverty in the Chinese Principality of Cheng. He was driven away by famine in 398 B.C. At that time, says the Taoist tradition, his disciples would have written down the substance of his teaching. Whereas the earlier Taoist treatise, the Tao-te-ching of Lao-tzu, is concise and compact to the point of being difficult to follow, the book of Lieh-tzu contains many anecdotes as well as longer explanatory passages, making it. along with the book of Chuang-tzu, of great value to those who wish to understand Taoism.
Leon Wieger spent most of his adult life in China; he died there in 1933. His translations are amongst the most readable ever produced, and they benefit from his having made use of the traditional Chinese commentaries, and his recognition that the Chinese characters should be translated according to their ancient meanings. Thus Tao is more accurately translated as the Principle (from its ancient meaning) than the Way (which is from modern Chinese usage).