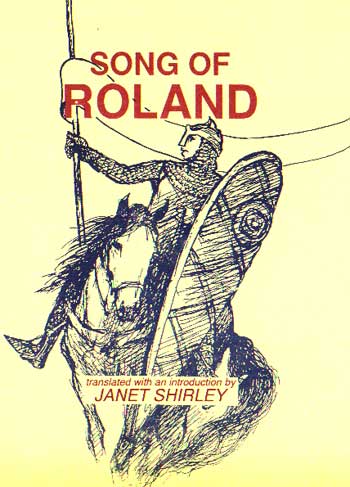 Translation into blank verse, introduction and notes by Janet Shirley. Highly commended and first runner-up for the 1998 European Poetry in Translation prize. Accessible and accurate. Typeset by the Book House, Ravenstonedale. Map by Vivien McKay.

A famous poem, which everybody 'knows' but hasn't read. Incidentally no one in the Middle Ages would have read it either. They would have watched and listened to it, it is a performance text - you have to imagine it put across by a performer who knew how to enact the different roles, who could at one moment be the stately emperor, next the furious young knight or the devious villain. At present the conversational exchanges, often very rapid, all lie flat on the page, but they are there for an actor to bring to life.

This, the oldest surviving version of the Roland story, was only rediscovered in 1837 in manuscript Digby 23 in the Bodleian Library.

It was probably written by a man called Turoldus or Thorold at the turn of the 11th/12th centuries, and links up powerfully with the crusading ethos of that time: go and slaughter non-Christians for the love of God.

Incidentally, it's not really the story of Roland at all, but of Holy Church - Roland dies before the poem is half done and the rest is the triumph of Charlemagne and God. The human thread running through all this is brilliantly shown with the minimum of words.

Roland and Ganelon, two of Charlemagne's most valued knights, hate each other. Why? No one tells us, people in those days knew the story, but we can guess - heroic Ganelon is the man who has married Roland's widowed mother, a lady the poet never even names, but we know she is Charlemagne's sister. We're among top people here.

Heroic sneaky brilliant Ganelon, what lies he tells! Roland has contrived to get him sent on an embassy to the Muslim king, i.e. to almost certain death. Ganelon creates such a firework display of untruths that the Muslims swallow his bait hook line and sinker, and are all set to make a sham peace with Charlemagne and then move in on Roland and his company and massacre them all. And so they do, but you can read the poem itself. Look out for Oliver, a man with good sense, whereas Roland his sworn comrade is only rich in courage and his arrogance is fatal.

Other books by Janet Shirley