The Life and Times of Thomas of Ercildune (The Rhymer) 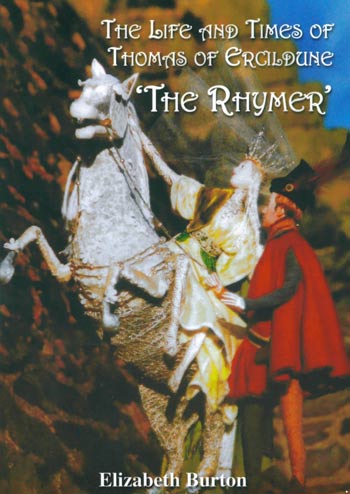 Sir Thomas Learmonth, True Thomas and Thomas the Rhymer; he is known by all three names. For those of you who are unfamiliar with any of these, here is a brief history. Thomas signed his name Thome de Ercildune and he was born early in the thirteenth century in Ercildune, a small hamlet in the lowlands of Scotland. By all accounts, he was as normal as the next man, until a chance meeting with a beautiful lady at the foot of the Eildon Hills near Melrose changed his life forever.
According to the legendary "Ballad of Thomas the Rhymer" the lady was the "Queen of Fair Elfland". The ballad tells that Thomas made love to the Fairy Queen seven times and was then bound to serve her in her own country for seven years. Fortunately for Thomas, the Queen does not deliver his soul to the devil, but returns him safely to the spot where they first met at the "Eildon Tree". Before they depart, the Fairy Queen bestows the gift of prophecy on Thomas, and from that moment, until his mysterious disappearance near the end of the thirteenth century, Thomas foretells many events which have mostly all subsequently come to fruition; his prophecies were unrivalled until the time of Nostradamus.
The book explores the basis of the lore and superstitions which were prevalent in his day, these being handed down through many generations from the times of the indigenous tribes. It also explains the formation of the country we now know as Scotland; the blend of tribes, languages, and cultures which ultimately united - or segregated - the people of the new nation. The life of Thomas, who was allegedly a great ally of King Alexander III, was further complicated by the King's untimely death in 1286. The events which followed ultimately led to the first "War of Independence", during which, according to written reports , Thomas befriended King Edward I greatest antagonist, William Wallace. The historical facts are explained in the book, as is the credibility of the words of the ballad as contained in the early manuscripts; five of which remain today.
Included, are transcripts from the five extant manuscripts which are explained in detail, two new poems dedicated to Thomas, and a 2011 version of the complete ballad and prophecies, taken almost word for word from the early "Quant Englis" version of the manuscripts and transcribed into present day English.
Included are colour pictures of present day sites relevant to the book.

Other books by Elizabeth Burton