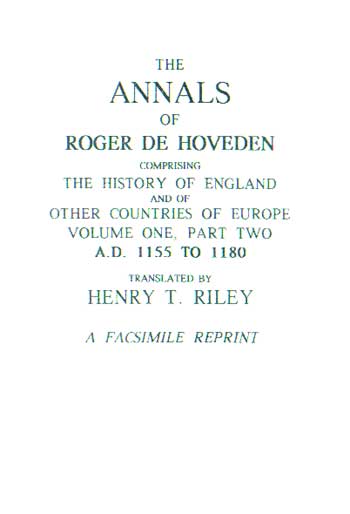 The Annals of Roger of Hoveden were intended as a continuation of Bede's Ecclesiastical History. They consist of a first part, commencing in 732 and concluding in 1154, and a second part from 1155 to 1201, a portion of which are reproduced in this volume (1155-1180). Events in the first part are treated with much greater conciseness than in the second which deals with those which had passed under the author's personal notice. Of the author himself, little is known; he was probably born at Hoveden, now Howden, in the East Riding of Yorkshire, which belonged to the bishops of Durham. He seems at one time to have been a professor of Theology at Oxford, and to have been employed perhaps at a later period of his life, as chaplain, clerk, or secretary to Henry II. This reprint is a facsimile of the edition of 1853. Each Volume sold separately.