The Annals of Tigernach. 2 Volumes 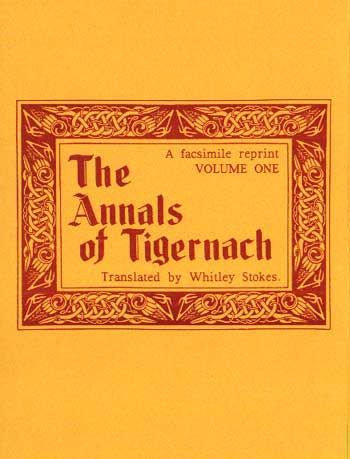 Tigernach hua Braein was a learned abbot of Clonmacnois, Ireland, who died in the year 1088. Of the Annals ascribed to him there are now extant only the following fragments: 1). From the time of the prophets Oseas,. Amos, Isaias, Jonas and Michasas to the time of Antoninus Pius.
2). From B.C. 322 (or thereabouts) to A.D. 360.
3). From A.D. 489 to A.D. 766.
4). From A.D. 975 to A.D. 1088. The first of these fragments was printed in the pages of Revue Celtique, dated by Whitley Stokes 17.7.1895. The other fragments appeared, with intercalated English translations, in the pages of Revue Celtique for the years 1896/97 (vols. xvii and xviii). They are reproduced in this two-volume paperback reprint in facsimile, making this interesting work readily accessible. This reprint includes also a fifth section, known as the Dublin fragment, and which is supposed to be part of Tigernach's work.

Other books by Whitley Stokes