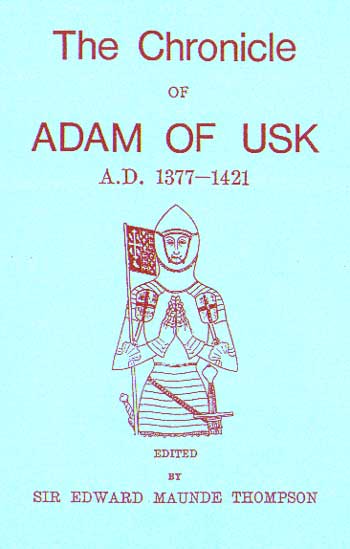 Adam's chronicle includes a detailed account of the last parliament of Richard II, and his fall and deposition. His personal share in the events which culminated in Richard's deposition render his account of things at that time so valuable. During the reign of Henry IV, Adam became a fugitive from justice, and he went to Rome at an important period of Papal history; that of the death of Boniface the ninth, and the succession of Innocent the seventh and his quarrel with the Romans and his flight from the city and subsequent return. These events afford our chronicler an opportunity for describing various public events there, of which he gives some curious details.
But, as a Welshman, Adam takes special notice of events in his native country, and his account of the progress of Glendower's rebellion contains many details of value. He in fact spent some time in refuge with Glendower, while still in disgrace with Henry, after his return from Rome, and this suggests some earlier understanding between them. Perhaps it was some connection of this nature that gave Adam his knowledge of Owen's letters of appeal to the king of Scotland and the Irish chieftains, which he incorporates in his chronicle.