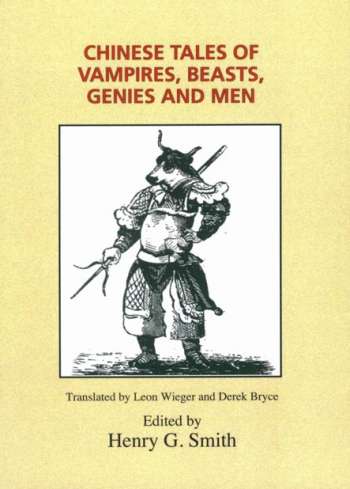 These tales were collected in China in the late nineteenth century by Leon Wieger, who translated a large number of them, published as Folklore Chinois Moderne (Modern Chinese Folklore). By modern, Wieger implied the period of Chnese history from the ninth century onwards. This book contains a selection of around eighty tales adequately representing the popular beliefs of the traditional Chinese people prior to the military and cultural revolutions that have changed everything.
The traditional Chinese believe that the body has two souls, a superior one that survives after death, and an interior one that normally disperses soon after death, and then the body decays.
Vampires, for them, are bodies from which the superior soul has departed but in which the inferior soul has not dissipated; it can keep the body alive for a longer or shorter time but only as a stupid and destructive beast without the intelligence of the superior soul. Thus they are not quite like the long-canined monsters of the Hollywood films, but thay are just as evil and destructive. The Chinese also believed in werewolves, and that tigers could enslave the souls of those they had devoured.
All the action in these tales take place in the three worlds, in which heaven is administered after the system of the Chinese Empire, and the underworld is like a sunless replica of the world above.

Front cover: KINNARA, a human form with a bovine head.