A Court in Splendour 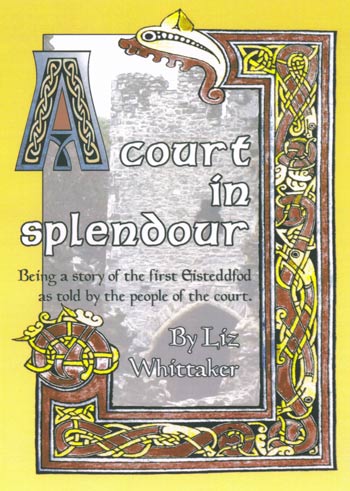 Being a story of the first Eisteddfod as told by the people of the court.

It is Christmas 1176 at the Court of the Lord Rhys in Cardigan Castle, preparations are under way for one of the most important events in Welsh History - a contest of Bards and Musicians, later known as the First Eisteddfod.
Walter Map, envoy to King Henry II is in attendance, and invites three of the people closest to the Lord Rhys to talk to him of their life and the pending contest. This they do, each throwing a new light on their leader, and on their life in the once Norman town on the banks of the River Teifi in West Wales.
Walter, with his love of celebrity chatter and the trappings of wealth, could be said to embody the spirit of a 12th century Piers Morgan. Sent by Henry II to the wilds of Wales to discover what is going on, he finds himself unexpectedly charmed by the welcome he is afforded and impressed by the wealth of poetry and music on offer from the best poets and songsters gathered from throughout Wales, Ireland, France, England and Scotland.
The book is written with a light touch - a genuinely accessible read with moments of high drama, humour and pathos carrying the reader with ease into the 12th century. Along with the political and romantic intrigues, the book offers an unforgettable insight into the court of The Lord Rhys and his uniquely imaginative moment in history which gave birth in later centuries to the annual celebration of music and bardic splendour that is the Eisteddfod today.

Other books by Liz Whittaker