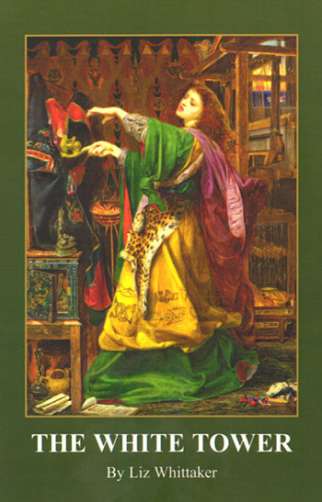 This fictional adventure is based in the dark ages, in pre-Arthurian coastal Wales. It is a time where the strength of the Druids is waning and the Christian priests are moving into Briton from Rome. The Courts of the Welsh Princes are the melting pot, where all the voices come together, clamouring for power. Amongst them, a magician and bard Pedroc Merlin, and a visionary Nimue Ceftan, fight to determine the future of Wales. Occasional invasions of Saxon marauders add further dangers, and after the death of the Roman King Vortigern, major choices lie ahead leading to a new leadership in order to protect the future of the people to live without fear, and make a way forward which retains the old ways and weaves them into the new.
Reviews: "How well the tightrope of conjuring a sense of the past across the precipice of our modern world has been walked. With aplomb I would say! I was transported by 'The White Tower' to the time and peoples it portrays. The 'old language' is there but the words flow and can be read easily in our superfast world which, it seems to me, has no time for knowledge, pondering or comtemplation. What a treat! Here is a story that slows you right down; transports you from our age of data and instant gratification to a time for reflection and gathering of knowledge. Characters are deeply drawn; descriptions of them and their habitats are so clear that they stand there as if thay are holograms within the bed chambers, caves, courts, halls and landscapes. Here is an author whose craft is honed. Here is a tale from the mind and eclectric experiences of a wise woman who knows how to tell a story, Liz Whittaker has successfully combined her creative spirit with crafting skill. Sha has woven myth and knowledge with observation, history and legend with detail, and added her own experiences of magic and pursued all with vigour. I was 'bathed' in 'The White Tower'. It extended many horizons for me. A true high point from the pen of Ms Whittaker. An exceptionally good read that took me willingly to another realm" Magi Goff - Artist.

Other books by Liz Whittaker