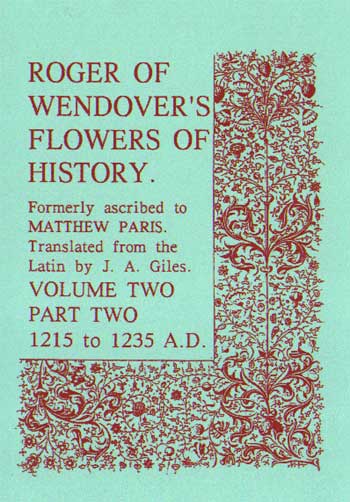 Roger of Wendover's Flowers of History comprises the history of England from the descent of the Saxons to A.D. 1235. It was formerly ascribed to Matthew Paris. This first paperback volume covers the earlier period up to 1066. It is a facsimile reprint of the English translation from the Latin, by J. A. Giles, first published in 1849. Little is known of Roger de Wendover himself except that he became prior of Belvoir, a cell attached to St. Alban's abbey, and that he was deposed from this post soon after the accession of Henry III. He was recalled to St. Alban's abbey, where he died in 1237.
The 'Flowers of History' contains an abridged history of the world from the creation to the year 1235. It falls into three parts. In the first comes the portion of the work prior to 447, copied from Roman and Greek writers and Geoffrey of Monmouth, which was of little value and not translated. The second part from 447 to the late twelfth century is of great value because Roger must have gathered his material from other original sources, many of which have since perished. The third part of the 'Flowers,' covers fifty or so years prior to 1235. In relating the events which happened in these times, Roger rises into the character of an original writer, providing us with an important contemporary account.
VOLUME TWO, PART TWO, 1215-1235 A.D.