The Likeness of King Elfwald: A Study of Iona and Northumbria 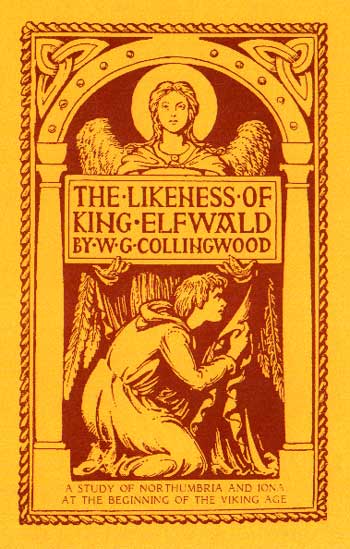 Who was Elfwald II of Northumbria? History tells us his name, but not his parentage; his temporary success against a usurper, but not the circumstances and causes of the struggle. These we are left to infer; for just at that period there is a gap in the chronicles. And yet the period is particularly interesting.
It was the turn of the tide in Northumbrian prosperity, eleven hundred years ago. The little nation had conquered all Britain between Humber and Forth; it had produced the Venerable Bede and the great scholar Alcnin. with much literature besides, and the art of the decorated stone crosses. It was settling down in peace and plenty, as if war were no more, when the Vikings arrived, and wrecked its civilisation â€” merely because it was unprepared.
The pictures of those times can only be given as a historical novel, because any other form would claim too much for the authenticity of details. Such a work may be thought to fall between the two stools of fact and fiction, but not more so than any restoration or reconstruction of an ancient monument, without which the fragments that survive say little to anyone but the specialist.
And moreover, these things were written for our learning. History need not repeat itself.

Other books by W. G. Collingwood