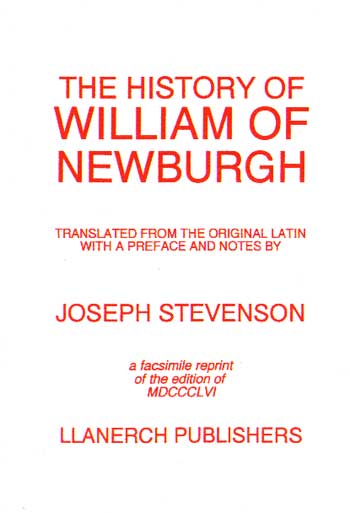 William of Newburgh was born in the first year of the reign of King Stephen, that is December 1135, or 1136. He describes himself as "William, a canon of Newborough", - a priory of Black or Augustinian monks - which he appears to have entered shortly after it was founded in 1145. There he probably spent the whole of his life.
This history, which begins with the Norman conquest in 1066, and ends in 1197, was undertaken at the request of Emald, abbot of the neighbouring monastery of Rievaux, to whom it was dedicated by the author. Far from being a barren chronicle of events collected without discretion, it aims at narrating, with some historical precision, the leading incidents of our national history - pointing as well to the causes in which these events originated as the results of which they were productive. In criticism, William of Newborough is in advance of his age; and he is freer from prejudices than might reasonably have been expected. The work contains internal evidence of having been written whilst the occurences which are therein recorded were in actual progress. The present translation by Joseph Stevenson is based on the text of Heme (1719); it is reprinted here as a facsimile of the edition of 1856 in the series The Church Historians of England.
Translated by J Stevenson. Facsimile.