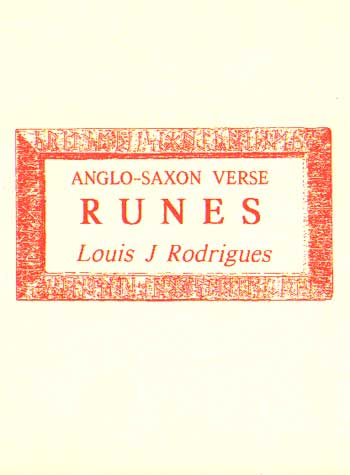 The main part of this work deals with runic verse inscriptions from Great Urswick, Thornhill, the Franks Casket and the Ruthwell cross, and Anglo-Saxon poems with embedded runes, namely the Cyn(e)wulf Signatures (selections from the four poems), Riddles, the Husband's Message, the First Dialogue of Solomon and Saturn, and the Rune Poem. The verses and their modern English translations are printed as parallel texts. The book also includes an introduction, notes, an appendix containing the Norse Rune Poems, and illustrations from original manuscripts.
Other books by Louis Rodrigues include Anglo-Saxon Riddles, Seven Anglo-Saxon Elegies and The Battles of Maldon and Brunanburh.